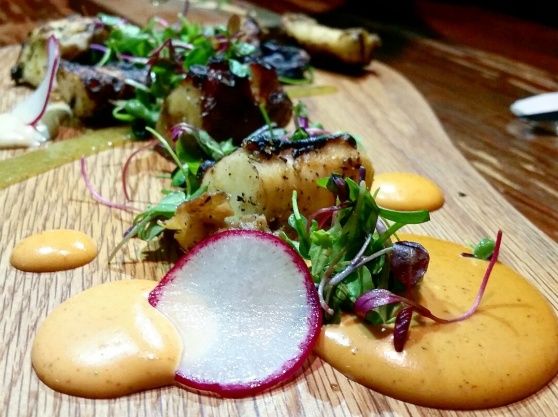 These days, the novelty and excitement when the words “modern American” and “fusion food” come to mind have pretty much worn off, at least compared to a few years ago. However, let me tell you about a great spot in Brea, CA doing something very different from your average New American restaurant. Something that’s worth getting excited about again.

Chef Chris Tzorin, a recent winner of Food Network’s Guy’s Grocery Games, is a friend of mine whose story inspires me and many others to keep striving for success, despite the cards you are dealt in life.

Chef Chris grew up in the fine dining industry, as his dad was a chef. “My dad would cook at home, my mom too, and we would sit together at the table and talk about how the week was together as a family,” he reminisced.

“My dad always told me I’d be better than him one day, and now I tell Armani (his young son) the same thing, so he can take it to the next level when he grows up. He hangs out with me in the kitchen.” Indeed, Armani was right there with his dad that night at the tasting, wearing his own little personalized chef’s coat!

However, when the accomplished chef lost his other son, Chris, it changed him forever. He teared up as he spoke of little Chris, and said that after going through such a dark and trying time, “That’s why you hardly see me upset. Life could be so much worse. I want to be able to experience a lot in life, and meet as many people (as I can) and inspire them.”

I suppose I especially wanted to share Chef Chris’s story because I see a lot of myself in the way he’s grown from his personal tragedies, and how he’s transformed it into something that drives him every day to do the most with the life he’s been given. And although the two losses are not comparable, as no two losses are, I share a similar outlook on life after losing my best friend, my mother, much too early. Chef Chris’s story inspires me, as I hope it will inspire many of you, to always keep pushing forward with the best attitude possible, to accomplish great things.

Chef Chris explained that it was his two boys for whom he brought his A game to win Guy’s Grocery Games on Food Network. “(After) two divorces and losing a child, after all the things I’ve been through… the blood, pain and tears, I’m still here.” And thank goodness, since he not only inspires people now, but makes amazing food in the kitchen, day in and day out.

Now that Chef Chris’s expansive career has led him to Tempo Urban Kitchen, he says he’s open to learning some newer techniques from the two younger chefs, Chef Salvador & Chef Charlie, who are big on molecular gastronomy.

“Here, we’re bringing more urban-style, outside-the-box food. Some will say, ‘No, you’re not supposed to do that,’ I’m gonna do it anyway…. I just want people to recognize me for who I am, and why I cook. It’s my life on a plate,” he concluded.

And with that, here’s what Chef Chris, Chef Charlie and Chef Salvador created for us at the coursed dinner:

Upon arrival, after a tour of the kitchen, we took a seat with fellow influencers who were also invited to this delightful dining experience. We started off with an Old Fashioned and a refreshing Mango Serrano Margarita with a Tajin rim.

Then, it was time to eat! The first course was Marinated Grilled Octopus, made by Chef Chris Tzorin. The octopus was plated on a wooden plank, as were all the dishes. The menu items are meant to be shared, to encourage more social interaction at the table, as Chef Chris explained. The tender, charred octopus was served with guajillo chili oil, creamy serrano chili sauce, lime cream and chipotle mayo, along with a garnish of fresh microgreens. All the different sauces made for a customized experience, as we could choose which bit of sauce to dip our octopus into.

Next up was a Korean-inspired, succulent Slow Roasted Pork Belly by Chef Charlie Medina. The soy lime glaze imparted a great tangy, savory flavor, and the tortilla puree it rested on was a unique element that brought the dish together as a “deconstructed Korean taco,” as Chef Charlie described it. The red cabbage kimchi and crema sauce completed the dish, along with a thin slice of rolled mango for a bit of sweet freshness. What made the pork extra juicy was its slow cooking in a traditional Caja China roasting box. 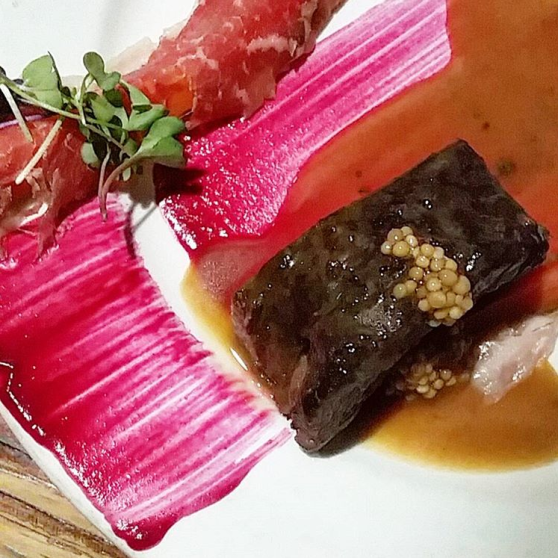 Our last savory dish was the Slow-Cooked Short Rib by Chef Salvador Carrillo. This brightly colored dish was created with yellow mustard seeds (what they called “vegan caviar”), pickled carrots wrapped in thin New York-style ham, and a bold brush of beet sauce across the plate. When Chef Salvador said “slow-cooked,” he really meant slow, as the cooking of the short rib for 28 hours made it extra tender.

After the drinks and three shared protein dishes, a cart rolled out for tableside ice cream! We watched in anticipation as the ice cream fully froze right before our eyes. Minutes later, as wisps of liquid nitrogen lifted, vanilla ginger ice cream emerged! The liquid nitrogen technique made the ice cream extra creamy in texture, and the mini cones they rested in gave a great crunch to the dessert. What a fun way to end a great dining experience!

Thanks to Tempo Urban Kitchen and Gigasavvy Social Club for having us. Go here for more information on visiting for a unique and memorable dining experience!

Until next time, let’s connect on social media! 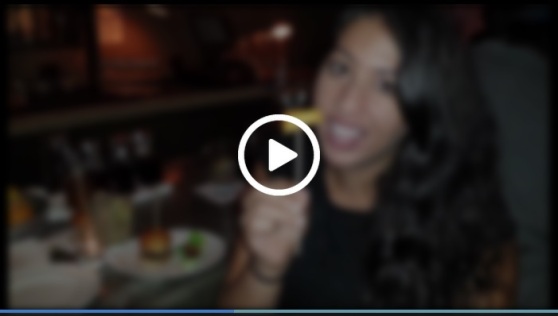 Get the scoop on Murph’s Service Station before its grand opening on Monday, Sept. 15!

Last night, I had the opportunity to be one of the first to experience Murph’s Service Station, a new restaurant concept from the talented, creative and intriguing Richard DiSisto, founder & principal of the Vantage Restaurant Group. It’s so new, it hasn’t even opened to the public yet! The grand opening is set for Monday, Sept. 15, so check out the exclusive scoop right here before the doors open to this highly anticipated food & drink establishment.

Although he owns a series of other notable restaurants like Tipple & Brine and Tunnel Bar also on Ventura Boulevard, when DiSisto sat down with me at the bar to chat about his newest concept, he insisted, “I don’t like to be called a restaurateur. I identify more as an artist.”

That makes sense, especially once he revealed that he builds the entire concept himself, and lets his creative vision lead him through the process. “I don’t know what it’s going to be like until I enter the space… and I don’t fully ‘get it’ myself until the last screw is in.” He continued, “Actually, I didn’t even ‘get it’ with Murph’s until last night when I came in at 1 a.m. Now I get it. Let the people make it what they want now.”

A sneak peek at the bar design.

When I asked him what he’d order first from the bar, he replied without skipping a beat: “Vodka soda,” and smiled. From past successes, DiSisto has found that by focusing on creating an environment that people want to come back to just to hang out, that’s what truly creates a lasting model in this industry. “Ambiance is everything,” he stated.

He went on to explain to me the unique backstory to his concept, as Murph’s is supposed to be a deserted art deco service station from the 1930’s, and that he bought it and restored it to open up in the postwar heyday of the year 1946. What a cool vision, right? Once you go, you’ll get it. It has a great vibe, with super service from bartenders and waitstaff alike.

Our bartender, Victoria, was a true rockstar serving equally strong drinks and entertainment throughout the night. We had planned on moving around more throughout the night, but Victoria and her super cool mohawk kept our booties planted firmly in those seats for a good part of the night! 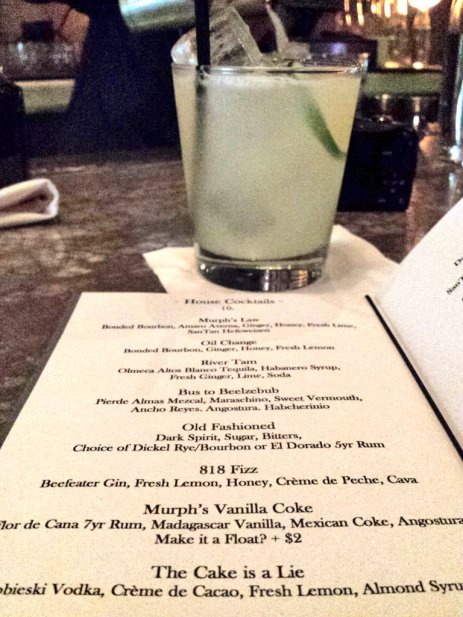 Check out the names of those cocktails! Pictured: The River Tam.

Speaking of the bar, I loved the names of the drinks, like “The Cake is a Lie” and “Bus to Beelzebub.” The ingredients, all housemade, like their pickles, charcuterie and ice cream, were also unique and well-balanced. The “River Tam” with tequila and habanero syrup was a good one, as was “The Cake is a Lie” (besides just the name!). Try the latter with the pickles. It pairs great.

It’s not a surprise that their cocktails are solid (figuratively, not literally!) since their bar consultant is a chemistry expert. One of their drinks has this unique habanero-cherry hybrid garnish called a “Habcherinio,” and I was OBSESSED with it (see video above). Victoria said they got it in downtown, so I definitely need to go get me some of those when I can’t drive up to Sherman Oaks. 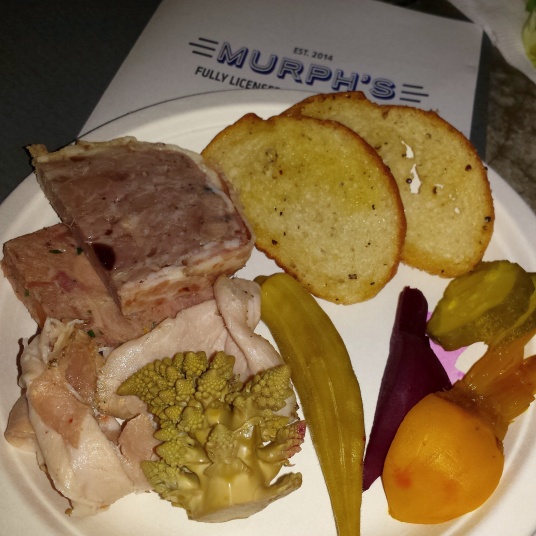 They use a nose-to-tail no-waste approach, which leads to a mean charcuterie spread.

Back to those potato puffs, though. They were like light, pillowy, melt-in-your-mouth clouds of mashed potato fried to a gold crisp, sprinkled with parmesan cheese and chives. This is where making friends with the bartender really pays off, folks. Victoria revealed to us that the secret to making them so light and scrumptious is that there’s pâte à choux (the same dough that cream puffs are made of!) mixed right in with the potatoes. What a cool idea! Definitely a must-try when you stop in. 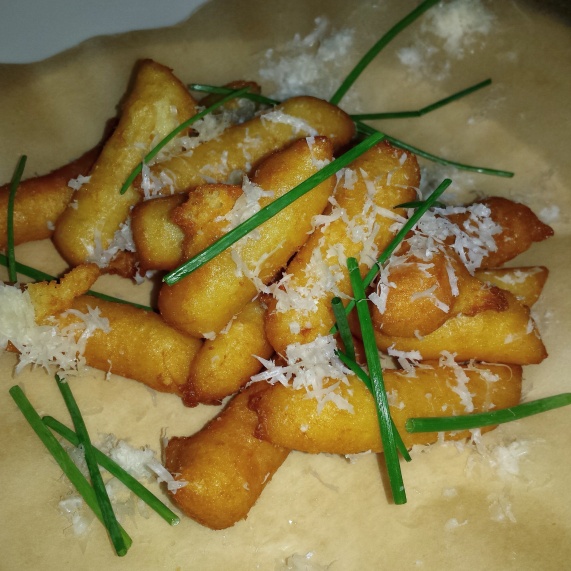 Potato puffs made with a surprisingly cool ingredient!

Another fun fact from Rich DiSisto himself: it took him just seven weeks from conception to opening Murph’s, and six weeks to open Tipple and Brine. Talk about drive! Keep an eye on DiSisto, as he aims to open a new restaurant concept every six months. We can’t wait, Rich!

Murph’s is located where Mad Bull’s Tavern used to be: 14649 Ventura Blvd. Sherman Oaks, CA 91403. Check out the video up above, and you’ll know why venturing to the Valley (we drove 100 miles roundtrip!) is so worth it for this new gem. Stay tuned to Tanaya’s Table for more restaurant news and videos. Cheers!

🐣 Just chillin' with my Peeps this Easter -- and birthday -- and NCAA Final Four -- weekend! 🎂🏀🥳
✨ The famous BBQ Pork Buns from legendary Michelin-starred dim sum restaurant Tim Ho Wan bring me back to my days in Hong Kong with their signature crispy, crumbly, slightly sweet crust, soft bun, and sticky, succulent caramelized BBQ pork. 😍
Sneak Peek Alert! 🔥 I've randomly been craving a giant Bavarian pretzel with cheese dip for a while now... and Smoke & Fire really came through with their *secret* menu at their newest location! 🤤🥨
😍 It's been so easy to satisfy my loaded nacho cravings without leaving the house, thanks to my favorite ingredients - including new Hispanic groceries - delivered straight to my doorstep via @sayweee_official! 🤗
🍓🍫 Had a blast making these Dark Chocolate-Strawberry Cashew Butter Cups along with @thefeedfeed @clarelangan & @milkandcardamom for some virtual Valentine's treat-making! 🥰 As a PB&J lover, I can confirm that this grown-up confectionery tastes dreamy af. 👌🏽🤤 Swipe through to get a closer look. 😉
🔥 Seared some King Oyster Mushroom "scallops" with brown butter & fried sage to honor my commitment to eating more nourishing, nutrition-packed homemade meals this year, while also continuing to support local restaurants. 🍄🤗